Hey, readers hope you all are doing well and are ready to ready another mobile game review. The one is pretty exciting as it looks inspired by the hit popular franchise Raman Legends. This is an opportunity to look into a game so well planned with a story, character, and gameplay that will keep you addicted for hours. Today we have a Review of Oddmar. A Viking platformer that is sure to make you stuck to your mobile screens.

This game is amazing, something you may not have seen before unless you played the popular Raman series. The graphics are pretty similar to Ramen, and so is the gameplay. It’s a must-play for any casual gamer cause it looks so well made and high quality that you won’t believe it’s a mobile game.

Mainly it is the graphics that make it look a lot like Raman Legends. The graphics almost look like they’re hand-drawn, and the movement is so smooth. You won’t see a single blur or lagging during gameplay unless you are using an ancient smartphone. The game is designed and developed on the Unity3D engine and has a vector-based art style.

The Unity3D engine is well utilized in this game because the game has a very smooth experience. The run, the attacks, the jumps, the special attacks, and the action sequence all look so amazing that you won’t stop playing the game until it’s past your bedtime. In between levels, you get cutscenes that discloses the story of the game. They tell you, Who is Oddmar? Why is he on this journey? The cutscenes are pictures with very slight movements, but the art looks like awesome vector art.

Oddmar is one of the very few mobile platformers I have seen that has a compelling story to keep you entertained. The story is about Vikings who feared great warriors of Norse mythology. You start at a village called Midgard. Here there are 2 best friends Oddmar and Vaskr. When Oddmar was younger, his parents went to war and never returned, so Oddmar lived with his friend Vasko.

Fast Forward to today, Oddmar’s village is prosperous and growing, but the Chieftain of the village is greedy. Like the others, Oddmar and Vaskr never participated with the village’s warriors to grow the village. Oddmar always stayed back and fed off the leftovers from the villages. The Chieftain was annoyed by this and ordered Oddmar to go burn down a jungle, loot it and bring any useful material he found back to him alone, or else he will be exiled and suffer the same fate as his friend Vaskr.

Heartbroken, Oddmar goes to his hut and sleeps. There he sees himself and his friend Vaskr in front of the gates of Valhalla (Norse version of Hell). The doors open, and in goes Vaskr. Then Oddmar is visited by an imp who tells him that he has let his people down, but he can make it up by accepting this gift. Oddmar wakes up from that dream and thinks that the dream felt way too real. On his chest was a small leather bag. However scared, Oddmar checks the bag for what’s inside it. It turns out there is a mushroom in it, and without a second thought, Oddmar eats it. There is a lot more to the story, but not going to spoil it all. This is just the intro.

The game is fairly simple: you jump around on platforms dodging obstacles, spikes, and clearing puzzles, most things you will find on any platform. To attack enemies, you can either jump on their heads or attack them with weapons and block their attacks with the shield. This feature is what you don’t see in most platformers. You can even buy stronger weapons and get some with special abilities that let you use the wind and other elemental attacks. 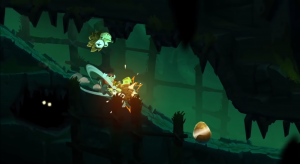 You can throw these weapons at enemies and also kill them with a shield stamp. The game mechanics are pretty cool, unlike other mobile games that have big touch-based joysticks and gamepads. Oddmar gives you small areas where if you slide left and right, Oddmar will move forward and backward. If you slide up, Oddmar will jump, and sliding down will trigger the shield stamp. Also, if you slide while inclined to a wall, you will jump off of that wall. We have a gameplay video for you to get a good idea of the game.

You do all of this while sprouting mushrooms everywhere. How did you get this power by eating that mysterious mushroom, of course? The game has only 1 mode, and that is the story mode. There are 6 stages, and each has 6 levels. In the story, you get many different challenges like rider animals, fighting bosses, hidden areas, and speed chase in which you are being chased. The only cons of the game are that after the first stage of the game, you have to pay $5 to play further, and every level has to be downloaded before you play it, so it’s going to take up a lot of Storage.

Simply put, the game is amazing, even if you want to play the first stage for free. And if you are a pro gamer or have a gaming channel, playing the full game for $5 on live streams and YouTube videos is an excellent idea because the game is worth it professionally. 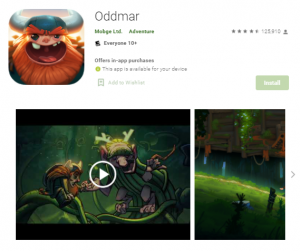 Oddmar has a 4.5 Rating on the play store and 1M + downloads. The best part of this game is that there are no ads at all. This is the most awesome game we have seen so far, and it’s free of ads. I hope you enjoyed this Oddmar Review. Please share the blog posts on social media if you enjoyed them and tell us if you like these types of blog posts in the comments. For more reviews like this one, check out our game reviews.

The revive Samsung Gear S3 smartwatch drops under $180 on Amazon

Commando behind the Jail- Escape Plan 2019