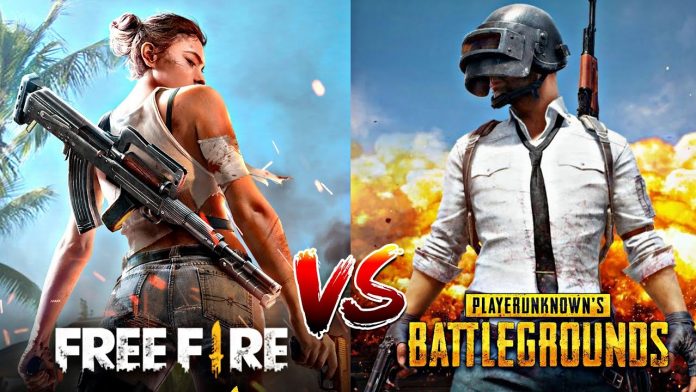 Looking back today, 2017 was a great Year for Mobile Gamers as on March 23rd, the company Bluehole launched their online Multiplayer Shooting Battle Royal Game The Player Unknown Battle Ground (Pubg). Once the game was available on the Playstore Since then, it has been Downloaded 734 Million Times. But Pubg Had a Tough Competitor in the same year. The Company Sea Limited Released its own Game Known as the Free Fire Battleground. This Game, after being available on The Playstore it is downloaded by 500 Million Times.

But App downloads are not the only deciding factor. So we are going to evaluate which games are better based on Some Very Important Factors and Finally Show you which one of the two is the Better App. So without further adieu, let’s get into the Comparison and Answer the Question of Free Fire or Pubg.

This is a big defining factor as the next level Graphics of the Unreal Engine gives Pubg a major boost in Graphics, but Free Fire is not too far behind as This Game is made on the Unity Engine. But the Point to Consider is how well it’s made. Both games have stunning Graphics and Visuals.

The Platform on which your game is available is very Important and impacts directly the number of users you can reach. If your game is only available to one certain Platform, the audience is limited to that one Platform. This can very well be the deciding factor between Free Fire or Pubg.

Pubg has a very Diverse Range of Platforms supporting it. You can Play Pubg on PC, Xbox One, PS4, Google Stadia, and Later it also released Pubg Mobile for Android and iOS. This helps Pubg to Grow its Player base to a lot more than just mobile players. In Contrast to this, Free Fire has only targeted Mobile Players. That does not mean that the game is not available to other platform users. You can play it on any platform by connecting your smartphone to your console or even your TV.

The Perspective of the Player can make or break your Games Reputation. It is one of the most important factors in deciding if the game is fun to play or not. This factor is going to be a short one to decide free fire or pubg.

Pubg and Free Fire Both have Well Designed and Interesting Characters and many characters inspired by celebrities. Pubg has Idris Elba, and Free Fire has Bollywood’s Hritik Roshan. Both Games have added relatable Celebrities in their Games. Let’s see which game has the better character customization Free Fire or Pubg?

As it Comes to Comparison, both Games Give a Great variety of customizations. Both games allow you to customize the Arsonal of your Character and many small bits like Hair, Facial Features, Clothes, and many other features.

Updates keep your game relevant as it allows you to act upon player requests and add more features to your game. Updates keep the user on the edge of their seats and make them expect more. Characters can very well decide Free Fire or Pubg.

We have listed the most important features above for the final decision on Free Fire or Pubg. And Pubg is the Better Games as it has Better technology and diversity. But this does not make free fire a bad game. It is a great game as well. That is why it is downloaded 500 million times. Many gamers who play Pubg also love free fire as well. There is no clear way to say Free Fire or Pubg. It is all up to the players which game suits them more. We hope. You Enjoyed our blog and found it helpful please visit more blogs in our categories and learn more about The variety of apps.