Hi Readers. This is our Latest Blog Post, and this is about an awesome New Game which I Started Playing recently. This is a very twisty action game that I stumbled upon while searching for a new game to play on the App Store. I enjoyed this game so much that I decided to make a review for this game myself.

I started playing this game 1 week ago, and in 1 week, I have reached the 18th Chapter already. Who could have thought I had so much free time even though I didn’t know that. The game is called “Cookies Must Die,” developed by “Twin Rebels.” It’s a fun and Tasty Action Game because of its in-game theme and storytelling. You’ll understand once we get into our Cookies must die Review.

The Story starts with experiments on edible fast food items like cookies and other junk food. The experiments were being done to increase the size of junk food and increase its nutritional value. Still, the experiments went wrong. The machine that was creating the extra-large junk food got hit by lightning, which got corrupted. The lightning added life to the Human-sized Cookies gave them limbs and Weapons like guns and bazookas. I know it’s a Crazy Story.

The Cookies captured a lot of scientists, took over many experiment facilities, and started producing many other crazy junk food soldiers. But the scientists were not going to give up that easily. They realized their blunder and started a new experiment (scientists never learn, do they?). They experimented on several humans and gave them superpowers.

These are the superheroes which we, the players, are going to control. They all have the superpower to leap off the air and attack these humanoid junk food items so hard that the cookies crumble into pieces. Our characters also have weapons and power-ups. We acquire these abilities as we progress through the game.

This is not just a simple hit-and-run game. Yes, it has the aspect of dashing through levels, but the game makes you fight against the junk food enemies at many points. Sometimes it gives you a proper boss fight, and in some parts, you have to kill a particular enemy and collect the key in its possession. That key opens the lock where the Kidnapped scientists are kept hostage and is also the way forward.

The Game also has a huge list of uniquely designed junk food characters for you to kill. Some examples are Cookies, Donuts, Smoothies, Candies, and many many junk food items. We have recorded a small Gameplay of the game to show you what you are getting yourself into.

To make it short, Cookies must die is not just a game it’s a masterpiece. This game is so unique that I have never played a concept like this one. Is that a big deal? No! Is that a big deal for me? Yes! Twin Rebel has taken a simple feature of touching the screen and directing your character, and developing an exciting story and an incredible action game out of it.

Cookies must die a great concept because it actively shows that junk food can kill us. This game can have a good physiological effect on people who are trying to quit junk food. They may even try to eat healthy because of it (I know that’s too much to hope for)

Anyways this game is different because it’s not your run-of-the-mill attack and run game, but it’s so much more. You already have a small screen. Why not utilize the whole screen by letting the character maneuver from any direction and kill the most unhealthy sugar-based junk foods you are trying to quiet anyway with awesome gymnastic moves. This game has a lot to offer and so much story to tell. I need to find out the climax as well. After all, I am only on the 18th chapter.

The Game is fairly new and has a very niche audience. Released on Feb 5th, 2020, it has 26K+ Players worldwide, with a rating of 4.4. The Game does contain ads and in-app purchases. The best part is that it does not include spam ads while you’re playing the game. It gives you a choice to watch an ad if your character dies. Just watch a 30-sec ad and revive your character.

This allows you to continue your game even though you have lost once. It does offer you in-app purchases but does not try to force you to buy the features you want. Only if you go to the in-app purchase section will you see the option to buy fake coins and diamonds via spending real money (don’t do that, please, enjoy the game). 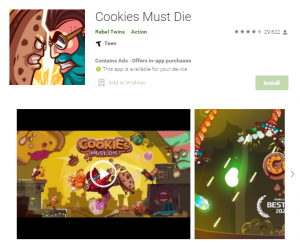 Either way, this is one of the best games to review for me. Suppose you have some time to spare and are looking to make your gaming entertainment time well spent. So please feel free to download the game at our given link below. We hope you enjoyed our Cookies must die Review.