Hi, Twisty Fans. We are back in action, and this time with a pretty cool Action Game. Today with us, we have AbyssWalker to review. This game is pretty awesome. It’s been a while that a game has given me Devil May Cry videos. I want to know why because AbyssWalker looks like a Mobile Devil May Cry Rip off. When I played this game, it got DMC vibes from this game. Cause of the hack and slash style fights.

As with every game, you will start with an annoying but informative tutorial. The game has cool features like character choice, character customization, upgrade system, sword, and gun-based attacks, just like DMC. The game is exciting and fun to play. Let’s get into our AbyssWalker Review.

The story of the AbyssWalker game is set in a cyberpunk era where your main character is given 2 weapons: a sword and a gun. Once you clear the tutorial, you walk according to the instructions or teleport to the previous location. This feature helps you get around the map and saves your time from figuring out where to go.

The fight sections are very similar to DMC. That’s why we say its game is a Devil May Cry Rip-off. You have swords and guns to fight with, special techniques for the sword and the gun. While fighting your enemies, you will come to realize that the attacks are very similar. Slash techniques and gunslinger techniques will remind you of DMC.

The Character Customization is very minimal at the start. Put, you get to choose your character’s gender, few facial features like eye color, face shape, hair, styles, hair color, and not.

Much more. But as you play the game further, you get to unlock Jackets for your male character and dresses for your female character. This gives you the ability to customize your character even further.

You also can unlock items as you play and use these items. You can get additional upgrades and special skills to aid you in your fights. You will unlock mechanized wings and even pets to mount and ride. The mount feature is pretty awesome because you unlock several different mythical creatures like dragons and others. 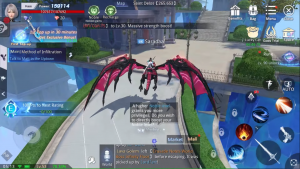 Mainly AbyssWalker is an online multiplayer MMO RPG that has borrowed a few elements like fighting and bike riding from DMC. Honestly, it is not a DMC clone; however, one can say that DMC heavily inspires it. The game starts with your main character riding his bike in a forest where they encounter adventurers like you.

This is where you get your first mission, and here the story starts. As the story progresses, you get a chance to go on a mission with other players and even NPC’s. As you progress in the game, you unlock more skills and abilities. You can unlock the Devil mode, which is a power-up mode, kind of like from DMC. You even fight more and more difficult and stronger bosses as you go along the way. 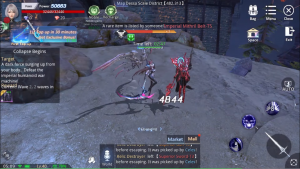 In my opinion, the game is not a DMC clone, but it has taken a lot of elements from the awesome game. If you don’t have a very high res and-memory smartphone, then the game will be very glitchy on your phone. This is something to consider, but otherwise, this is an awesome game. Another issue with the game is that it has so many features that your small smartphone screen will be very much clustered with feature icons and notifications, hindering your gameplay.

This game is one of the most awesome mobile games we have reviewed thus far. An action MMO RPG that DMC heavily inspired. The fights and missions are very entertaining, and the game mechanics are very smooth. The skillset is awesome, and you unlock so many skills in such a little amount of time.

The level-up system is quick as well. The longer you fight, the more you grow. This makes for a pretty interesting levering-up system for creating longer and more complex combos. Overall if you have a nice smartphone, this is an exciting game to play. You can download AbyssWalker on the Play store.

The game developed by 9Splay Developer has 10k+ reviews with an average 4.0 rating. The game is available on Android and iOS free to play but offers in-app purchases. You can download it from this link. 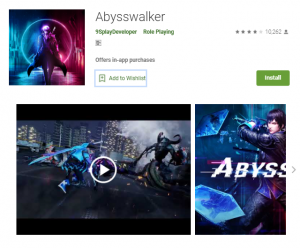 Just like always, we hope to provide you with the most honest game review. We have enjoyed this game very much, and it is such an awesome game to play. Please, if you enjoyed our blog post, please do read more android game reviews. Thanks a lot to all of our readers.